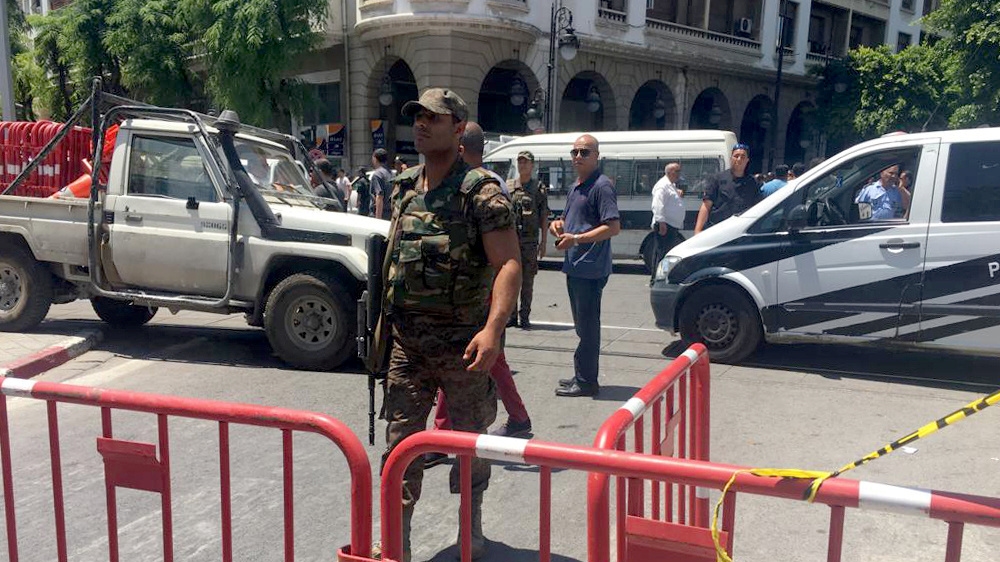 The first explosion on Thursday saw a suicide bomber targeting a police patrol in central Charles de Gaulle Street in Tunis far from the French embassy.

One policeman was killed while another was wounded, according to the Interior Ministry. Three civilians were also wounded.

An AFP correspondent reported that body parts were scattered around the police car on the street.

There was a loud explosion in the neighborhood.

A second attacker blew himself up shortly thereafter at a National Guard base in the Al-Qarjani district of the capital, the Home Office said. The attack wounded four security forces.

1:00 am (10:00 GMT) a person blew himself up in front of the back door," Interior Ministry spokesman Sofiene Zaag told AFP.

N o Responsibility was immediately taken for each explosion.

Local journalist Massinissa Benlakehal told Al Jazeera of Tunis that the explosion on Charles-de-Gaulle Street was only 15 meters from the French embassy. [19659004] Benlakehal said such incidents in Tunis have been relatively rare in recent years, with "the usual problems that Tunisia has with terrorism [occurring] outside the capital".

The violence came four years after the deaths of dozens of people in attacks by the Islamic State of Iraq and the Levant (ISIL or ISIS).

Two of the attacks were targeted at tourists – one at a museum in Tunis and one at a beach in Sousse – while a third under the presidency was guards in the capital 4] In February, a Tunisian court sentenced seven people for museum and custody Beach incidents to life imprisonment.

Thursday's attacks took place only a few months before the scheduled elections and during the high tourist season in Tunisia. [19659016].