Two Reuters reporters imprisoned in Myanmar freed after over 500 days 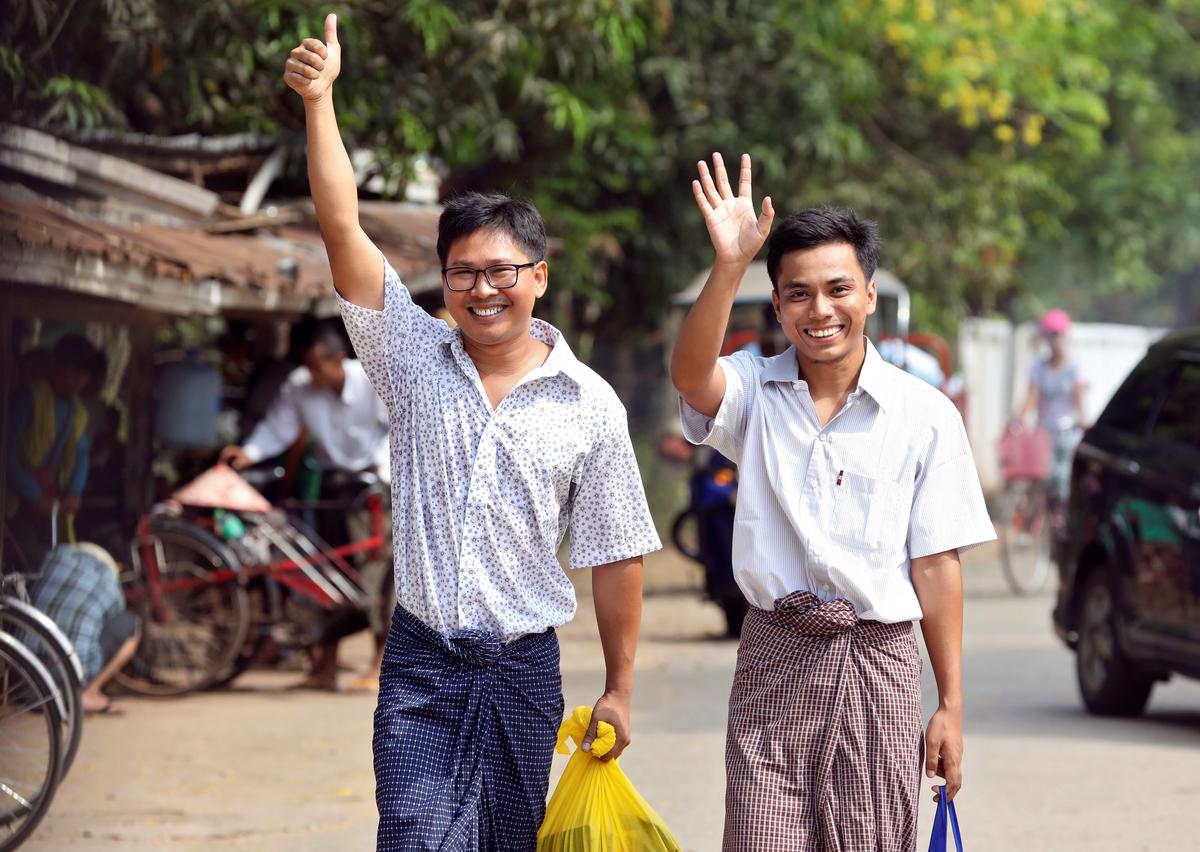 YANGON (Reuters) – Two Reuters journalists jailed in Myanmar after being convicted of violating the Official Secrets Act were released from jail outside Yangon on Tuesday after being more than 500 days behind Had spent bars.

Reuters reporters Wa Lone and Kyaw Soe Oo gesticulate as they go to the prison gate of Insein after being released after being pardoned on May 7, 2019 in Yangon, Myanmar. REUTERS / Ann Wang

The two reporters, Wa Lone, 33, and Kyaw Soe Oo, 29, were sentenced to seven years in prison in September. In one case, questions about Myanmar's progress towards democracy were called for, and an outcry was launched by diplomats and human rights lawyers.

President Win Myint has pardoned thousands of other prisoners in mass amnesties since last month. In Myanmar, it is common for authorities to release prisoners throughout the country during the traditional New Year, which began on April 17.

Reuters said the two men had committed no crime and demanded their release.

Inundated by media and well-wishers as they walked through the gates of Insein Prison, a grinning Wa Lone kept his fingers crossed and said he was grateful for the international effort to secure their freedom.

"I'm really happy and excited to see my family and colleagues. I can not wait to go to my newsroom, "he said.

Kyaw Soe Oo smiled and waved to the reporters.

Prior to their arrest in December 2017, they had been investigating the killing of 10 Rohingya Muslims and officials by security forces and Buddhist civilians in Rakmine, western Myanmar, during an army crackdown in August 2017. [19659004] According to UN estimates, the operation sent more than 730,000 escaping Rohingya to Bangladesh.

The report written by the two authors with testimonies from perpetrators, witnesses and families of the victims was awarded the Pulitzer Prize for international reporting in May, contributing to a series of awards the couple received for their journalism. (reut.rs/2KFTSgQ)

Calls to a spokesman for the Myanmar government were not answered immediately.

Reuters Editor-in-Chief Stephen J. Adler said he was enthusiastic about the news.

"We are thrilled to have Myanmar publish our brave reporters Wa Lone and Kyaw Soe Oo. Since their arrest 511 days ago, they have become symbols of worldwide press freedom. We welcome your return, "Adler said.

The wives of the reporters wrote a letter to the government asking for forgiveness in April, not because their husbands did something wrong, but because it would allow them to be released from prison and reunited with their families.

The Reuters journalists were released in jail from Lord Ara Darzi, a British surgeon and health expert who was a member of a Myanmar government advisory group on reforms in the Rakhine state, and a Reuters representative.

"This result shows that the dialogue works even under the most difficult circumstances," said Darzi.

In a statement, Darzi said the discussions over the pardon of Wa Lone and Kyaw Soe Oo had involved the government of Myanmar, Reuters, the United Nations and other governments, but had not specified.

Darzi had told Reuters this year about his efforts to free the two, and the company was grateful for its role in its implementation, Reuters spokesman said.

Darzi was a member of a consultative commission that was formed to test the advice of a former UN chief, Kofi Annan, to resolve the long-standing conflict in Myanmar's western region in the state Rakhine.

The state of Rakhine in the Bay of Bengal was the home of most Rohingya Muslims in Myanmar. Hundreds of thousands fled to Bangladesh after being led by a military in the area in 2017.