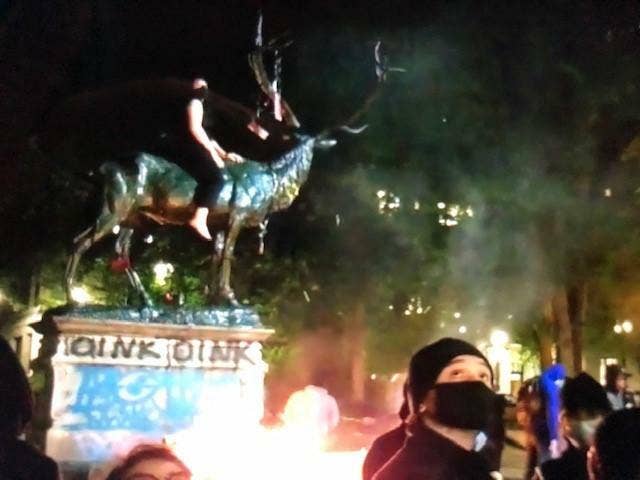 Portland police rioted early Friday during the riots near the Federal Supreme Court in the city, calling on protesters to leave the area or to hand over ammunition to control the crowd.

The police described a chaotic scene. They said several demonstrators had “lit fires, thrown stones at officers, aimed lasers at officers and fired projectiles with slingshots at officers.”

Andy Ngo, the journalist, released a video about the riots near the federal court in which the US military protected the attacked building.

“They rushed out and arrested here,” he posted. “Antifa tried for hours to set the building on fire.”

He said the downtown police were “attacked” for hours. When police officers try to answer, “they go on social media and tag politicians and lawyers who say police brutality”.

On Wednesday evening, anarchists set fire to a 120-year-old moose statue in the city that Oregon Live had previously said was the target.

Chuck Lovell, head of the Portland Police Bureau, said in a statement: “Criminal activities such as vandalism and property damage are not a peaceful demonstration. We ask the public for help identifying and sharing information about those responsible so that they can be held accountable. “