Breaking News
Home / World / What follows after the resignation of Evo Morales to the Presidency? | news

What follows after the resignation of Evo Morales to the Presidency? | news 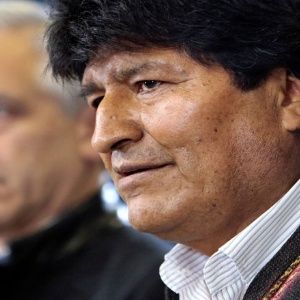 Following the resignation of Evo Morales to the presidency of Bolivia when the coup d'état was carried out against him, the government of the nation is being redesigned in accordance with Article 169 of the Constitution.

Coup in Bolivia: Evo Morales resigns to preserve peace in the country.

This scenario is not possible because Vice-President Álvaro García Linera has resigned from his position at Morales. Both leaders said that the decision aims to guarantee peace in Bolivia against the aggressions of the political opposition.


In this case, the Presidency must be taken over by the President of the Senate, a position held by Adriana Salvatierra of the Movement to Socialism (MAS), the party of today's ex-president. However, the Senator resigned hours after Morales's announcement.

Adriana Salvatierra (MAS) announces her resignation from the presidency of the Senate.


In view of the refusal the President of the Chamber of Deputies has to call new elections within a maximum of ninety days.

] Also in this position there was a recent resignation of Victor Borla, who was under pressure after his house was burned in the city of Potosí and his brother Marco Antonio Borda was taken hostage.

Since my brother was taken hostage and barefooted at the moment, I ask you to respect his life. The problem in my ideology lies with me and not with my family, "said Borla at the time of his resignation. Morales and García Linera resign after opposition leader Carlos Mesa, presidential candidate of the Citizen Community (CC), and Fernando Camacho, chairman of the Citizens Committee of Santa Cruz, have ignored the re-election of Morales following the recent elections of the 20th October.

The Right denounced alleged electoral fraud, and Morales requested a poll by the Organization of American States (OAS). As the review progressed, the political opposition did not stop acting violently against vulnerable groups in Bolivia.

The coup d'état against Morales was consumed this Sunday when the OAS mission was discontinued before completion of its work issued a preliminary document calling for the holding of new elections to calm the violent actions of the opposition and doubts about the indigenous president's election victory be voiced.

Despite the demand for new elections, the opposition insisted on the attacks and there was a wave of resignation from politicians in line with the indigenous president's government.

Subsequently, the army, the police and the Ombudsman's office suggested that Morales resign, so that the country could be pacified in the face of the opposition's violent attack.

URGENT. The armed forces suggest that President Evo Morales resign his post as President of Bolivia.


"We give up so that our humble brothers will not be kicked anymore, we do not want clashes," he said in a video sent to the Morales Nation, accompanied by García Linera.