Views from inside the church – Rolling Stone 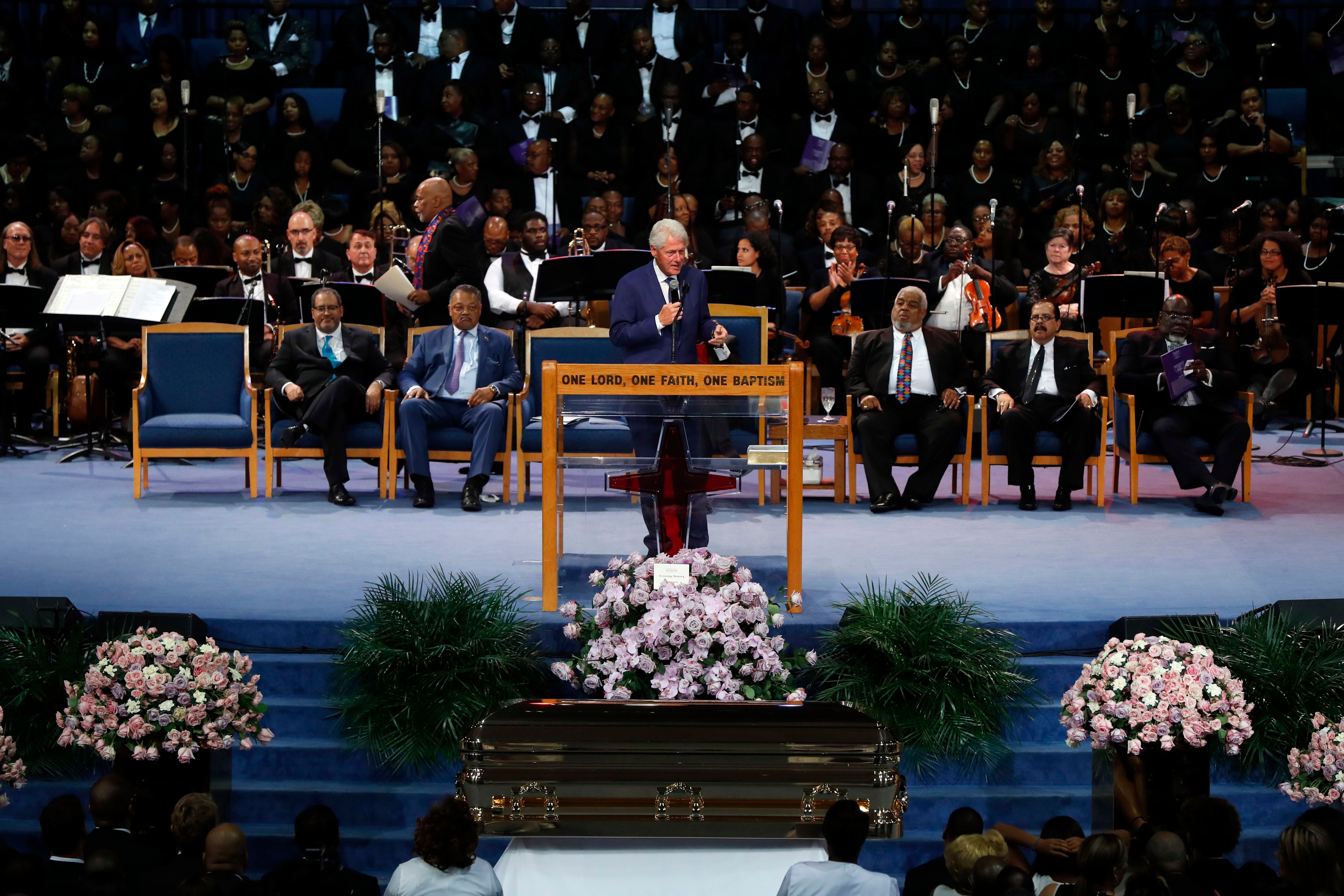 Matching a woman whose influence has been for decades and across genres, Aretha Franklin's eight-hour funeral on Friday included just about everything and everyone. In the 4,000-seat Greater Grace Temple in Detroit, Franklin was praised by past presidents, entertainment titans and religious figures: Bill and Hillary Clinton, Reverend Jesse Jackson, Clive Davis and Franklin's grandchildren represented every aspect of their lives.

Letters from both Barack Obama and George W. Bush were read aloud. (Franklin, wrote Obama, reflects "the very best in American history.") Performers ranged from Ariana Grande to Cicely Tyson, who is nearly four times Grande Age, showed more spank and energy with her theatrical reading of "When Malindy Sings" (reshaped as "When Aretha Sings") by the vital, African-American poet Paul Laurence Dunbar from the late 1

9th century. The tribute was sprawling, overwhelming and musically potent.

Although the entire service was broadcast live, sometimes the view from the church was a bit different. Here are a few things you may not have noticed during the transfer.

Franklin's influence became apparent before everyone went to church
The Seven Mile Road, the wide boulevard on which the church stands, was lined with families sitting on pop-up or beach chairs to feed their own Waiting as limousines drove by. Two dueling Aretha T-shirt smugglers also got into a brawl on a 7 Mile Corner. But Franklin's influence, especially in the music world, was seen in the lobby, where massive floral arrangements by Barbra Streisand, The Jackson Family, Mariah Carey, The Four Tops, Tony Bennett and The Carters (yes, Jay-Z and Beyoncé) were exhibited. It's hard to imagine so many artists being greeted by so many colleagues.

Gospel Went Better Than Pop
It may not have been easy to say on TV or online, but sacred music electrified the thousands in Greater Grace Temple more than the pop star gigs. Faith Hill, one of the first performers of the day, tackled the Christian hymn "What a Friend We Have in Jesus," and Ariana Grande offered a relatively modest interpretation of "(you make me feel like I am) a natural woman." 19659002] While these performances were respectfully received, it was the spiritual numbers that repeatedly brought the crowd to their collective feet, while local gospel heroines, the Clark Sisters, unleashed grandiose three-potency harmonies in the "Is My Living in Vain." Call and Response of the Williams Brothers and Vanessa Bell Armstrong at the end of "Precious Memories" (which Franklin himself once recorded) in a euphoric version: Chaka Khan's interpretation of the gospel standard "Goin & # 39; Up Yonder," which has always been Once again, the impressive Aretha Franklin Celebration Choir was performed, unfolding its intensity and revealing ecclesial aspects of its voice that we have not heard for a long time

Considering Franklin's roots in the church, it was only natural that gospel was part of the program, but the crowd made it clear that these were the kinds of songs they longed for, almost as a possibility to channel their grief. Interestingly enough, many of the speeches referred to their version of "Respect," but the song was never performed by anyone.

Bill Clinton is still a lover and Donald Trump is still not
Judging by the Church's response to its introduction and recognition, Clinton maintains a strong bond with African Americans even after almost 20 years. His affection for Franklin came through as he talked about how he and Hillary were "Aretha Groupies" during their youth and the time he spent with Franklin backstage at their last public performance (Elton John's AIDS Foundation last year) November, where he was surprised that she sang) for 45 minutes despite growing health problems). Clinton took his toll by pulling out his phone and playing "Think" on the microphone. ("It's the key to freedom!" He beamed). The crowd ate everything up.

One of the only eruptions in the church that grew louder was when writer and georgetown professor Michael Eric Dyson insulted the current president's comment on Franklin ("She worked for me"). With unconcealed indignation, Dyson, one of the fiercest tribute speakers, yelled, "She's not working for you, she's been working on you, she's been working on you, getting her preposition right!" The church practically shook in response.

With all the talk about Franklin's music, its political and cultural significance was far greater in the church
Many of the speakers, from Tyler Perry to the former Attorney General Eric Holder cited her favorite songs by Franklin ("Dr. Feelgood" for Perry, for example). Clive Davis, who rekindled Franklin's career in the 1980s, spoke of meeting her in 1979 to plan their comeback and proudly named all the hits they had to applause.

But Franklin's role as a symbol of civil rights and empowerment came more than stories of the power of her voice. "She has never been ashamed, she has never put us in disgrace," said Reverend Al Sharpton, adding that although people disagree in many things, "we all agree on Aretha." She "left the world a better place than she found," said another minister. During his grim tribute, Jesse Jackson gently said, "If you leave here today and do not register, you will dishonor Aretha." (Jackson seemed most visibly struggling with the day, as he repeatedly closed himself over the Als coffin as Franklin's open coffin before the tribute began, he stepped to the stage and put his hands on the coffin to say goodbye for good Franklin's music was loved in the church, but her struggles, determination, and diligence made her one of the most humane pop stars.

Stevie Wonder was worth the wait
Along with the nameless "National Artists," Wonder was supposed to close the service around 3 pm The day stretched longer than anyone had planned for various reasons, one of which was the networking, hugs, and introductions that took place on the church stage, As the audience fell in. Church members could see Clinton introduced to Grande and her fiancee Pete Davidson when Louis Farrakhan joined (Take this group of participants for a moment.)

At 6:00 pm Wonder was nowhere to be seen, and the energy in the Greater Grace Temple diminished. Part of the audience was filtered out after eight even hours, and at the last minute Gladys Knight sang "You'll never walk alone" while the crowd waited.

Then Wonder was announced and accompanied on stage. He looked serious and painful, dressed in black, his braids under a black cap. Pulling out a harmonica, Wonder began playing "the Lord's Prayer" instrumentally as the replacement musicians cautiously contributed to the tribute. Nobody seemed to know where he was going or when it would end. When the time came, Wonder talked a bit about Franklin: "Because black lives are important, because all lives are important, and if we love God, then we really know that it is our love that makes all things important Aretha has been telling her all her life. "

By that time, most of the well-known actors who had performed earlier had left. But together with the Clark Sisters and others, Wonder sat down on a keyboard and played "ace". His refrain – "That I will always love you" – revived the fluttering energy in the church and served as a poignant finale. [19659002]