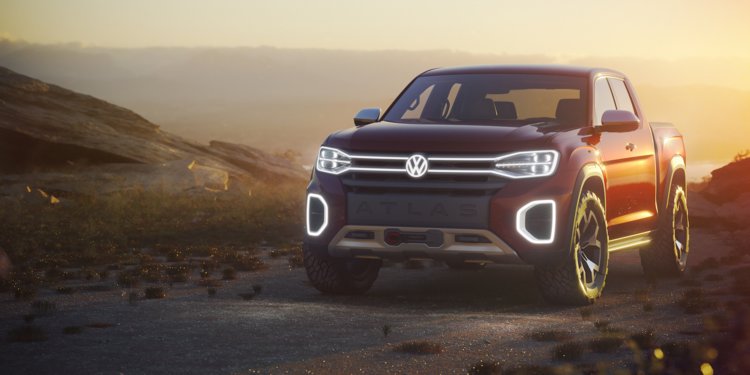 Volkswagen has been seriously trying to conquer an American market dominated by SUVs and pickups over the past year.

And on Wednesday, the automaker unveiled the Atlas Tanoak, a pickup truck concept that signaled the company's increased attention to US consumer preferences.

The pickup pickup with crew cab and short bed debuted at the New York International Auto Show. Volkswagen is not currently planning to produce the vehicle, although the company stated in a press release that it would consider a production version of the concept based on the response it receives.

The Atlas Tanoak has a 3.6-liter V6 FSI engine, an eight-speed automatic transmission and the VW 4Motion four-wheel drive system. The vehicle's engine can generate 276 horsepower, 266 pound-feet of torque and accelerate from 0 to 60 mph in 8.5 seconds. At 214.1 inches, it's 15.8 inches longer than the VW Atlas SUV, and its 9.8-inch ground clearance is two inches higher than the Atlas.

Five passengers can be accommodated in the interior. Most interior settings are controlled digitally via a touchscreen infotainment system.

Prior to revising its SUV product line, Volkswagen struggled to assert itself in the US market through its reliance on smaller passenger cars, a strategy that was successful in Europe, Asia, and South America but did not accord with American preferences for larger ones Vehicles.