Warriors vs. Spurs: Gregg Popovich's rude answers to media questions are getting old 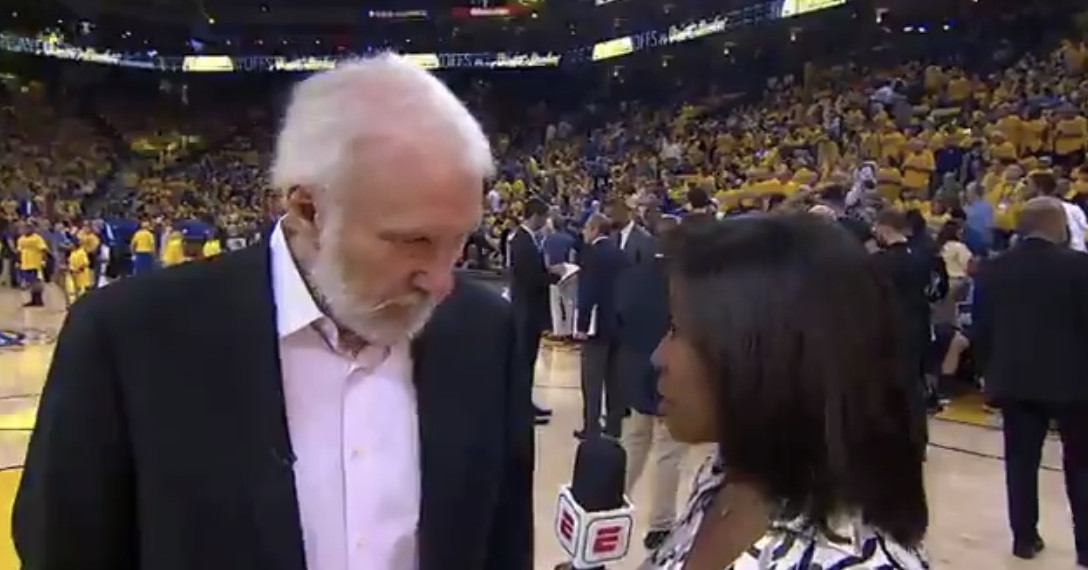 The Golden State Warriors scored a full-blow to the San Antonio Spurs in Game 1 of their NBA playoff game, and head coach Gregg Popovich was visibly pissed off.

In an interview with Lisa Salters of ESPN in the second quarter gave two answers to two questions in 16 disingenuous words. Here is video, and the interview is transcribed below:

Salters: I heard that you told your boys a few minutes ago: That's called adversity. Go through it. "What has to change to make it happen?

Popovich: Well, we have to play a bit better.

Salters: When you came into the game, you said that you need to defend Kevin Durant better in this first quarter, what else has to happen to make him play better?

Popovich; we have to play him better.

This is not news from Popovich, who has a history of treating side interviews this way, and Salters had no choice but to abruptly quit their live spot, which was unpleasant for everyone

Pops Bit was more than played at the time, but that did not stop his media roast at the end of the game either fair, he was not asked the most insightful questions, but he was still unnecessarily rude.)

Popovich: Just because you kicked your ass does not mean you have to lose your sense of humor. "Ok, what do you want? "[1

Popovich: You played better than us.

Reporter 2: You started Danny Green with Kevin Durant. Did they work very well?

Popovich: Did you see the game? What do you think?

Reporter 2: That did not do it

Popovich: It did not work well. So we'll let Danny grow five inches by Monday night and tell him to jump higher and get faster. And we'll tell Kevin, "Do not be so good."

I think we understand it at this point, Pop. The joke has lost its taste and seems disrespectful. There are many times that reporters misinformed or altogether ask only bad questions that are acceptable for frying. These were not these times.

It's bizarre that we hold players at a higher level than coaches, and I hope that changes.