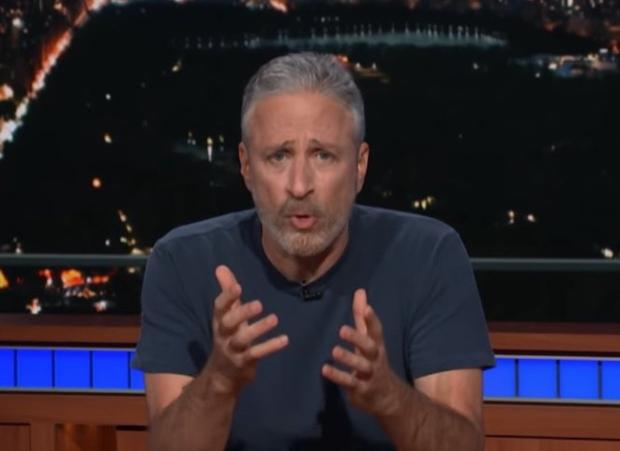 Jon Stewart reappeared under Stephen Colbert's desk during a performance on The Late Show Thursday to speak to President Donald Trump.

The former host of The Daily Show, who grew up in Lawrenceville and owns a shelter with his wife in Colt's Neck, is known for his meditations on Trump's guest appearances on the late-night show. Recently, he also appeared in a segment in which he proclaimed the existence of central New Jersey.

"Hello, Donald!" Stewart, 55, began his message to Trump. The guy you made everyone know he's Jewish on Twitter.

He referred to Trump's tweet in which he wrote: "I promise you that I'm a lot smarter than Jonathan Leibowitz – I mean Jon Stewart @TheDailyShow, who's totally overrated by the way.

(Trump followed the tweet with another as Stewart should not have changed his last name and on whom he should be "proud" of his heritage, "while calling him a" total fraud "."

"It It's just that we still have a bit of trouble adjusting to your presidency when it's in its 500th year, "said an angry Stewart, rubbing his face with his hands.

He said that thanks Trump is all backwards and upside down – "Apparently, Putin and Kim Jong are now noble, intelligent role models, and Canada is a bunch of giant *** holes."

"You repeat the post-war alliances just this time, we're with the Stewart continued.

He told Trump that a hallmark of his presidency was that "no matter what you do, it always comes with an extra layer of horrible cruelty and gloom." He said this was in To see Trump's vehement opposition to NFL players taking a knee. He hinted that women who accused him of sexual abuse were ugly and described the media as enemies of the people.

"It's not even partisan," Stewart said. "Anyone in the Republican Party who dares to speak against you must also be humiliated, even if he has a deadly disease." He referred to Senator John McCain, who suffers from brain cancer.

He said that the Trump Doctrine is best explained by a clip by Arnold Schwarzenegger in the movie "Conan the Barbarian" of 1982: "Crush your enemies, see them driven before you and hear the lamentations of their wives. " [196592002] Stewart told Trump he could have pursued a more stringent border policy without sticking to the lengths his government has taken in separating families.

"But I think it would not have gone right without a Dickensian villainy," he said. "They casually separated asylum seekers from their children, from babies."

So Stewart tried to negotiate with Trump to give him something that might compel him to withdraw from this "hideous cruelty."

"How about we give you a huge building with gold toilets and your name on it?" He suggested that only Colbert, who lives in Montclair, crawl out from under the whisper in which Trump lived. How about a news network that would praise everything it did? Colbert informed Stewart about Fox News. Or maybe a volcano that would destroy part of Barack Obama's home state of Hawaii? Enter Colbert with the word on Kilauea.

Stewart abandoned these options, but he said he would pull the line on another thing: "I will not allow you or your sycophants to turn your cruelty into virtue." With these words, he met some clips of Trump's defenders, who described him as a strong leader, fighter and "compassionate people".

To explain the concept, Stewart referred to Abraham Lincoln's 1860 speech at Cooper Union. When he was still president, Lincoln said slave owners wanted free states to "stop calling slavery wrong and join them if they call it right."

"What Donald Trump wants is for us to stop misrepresenting his cruelty and his fear and division ability, but to join him in right words," he said. "And we can not," Stewart said, applauding the end of his statement, "and by not giving in, we'll prevail." He expressed an incomplete sentence as the jubilation continued. "Unless, of course, the Democratic leadership remains a group of fuckless …"