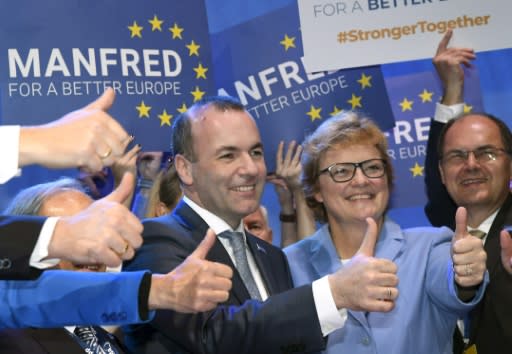 Europe's main right-wing parties selected German MP Manfred Weber on Thursday to lead them to next year's European election campaign – possibly a shot at the EU's most powerful post.

1; an ally of German Chancellor Angela Merkel – won the support of 79.2 percent of the delegates of the European People's Party (EPP) held in Helsinki, easily beating the 20 percent of former Finnish Prime Minister Alexander Stubb.

If the EPP maintains its position as the largest political group in the European Parliament After the May elections, Weber will be in a strong position to champion Jean-Claude Juncker as head of the European Union's executive branch.

However, some polls predict that the EPP under pressure might lose its crown from populists populated on the left or right, or EU Member State leaders – who will have the final say – decide not to nominate a party candidate at all.

Nevertheless, the candidacy is an important price for the horse trade for top jobs that will take place after the EU elections on May 26 next year.

Also in the mix are pits to lead the European Council, which represents national governments – the European Parliament, the European Central Bank and the bloc countries foreign policy.

Weber is little known in Germany. He has many years of insider knowledge of EU institutions, but little experience in the government of his home country.

The 46-year-old former businessman was already a young man in the Bavarian state parliament before he went to Europe without ever assuming national responsibility.

He is a discreet figure who builds a network of influence in Brussels and Strasbourg.

In his last speech before Thursday, he suddenly agreed with critics who accused him of whistling to immigrants and right-wing extremist parties with some of his earlier remarks about the Islamic headscarf and European identity.

Loving from his native village of Alter in Bavaria, in the conservative Roman Catholic south of Germany, Weber said that Christianity is the "one thing in common" throughout Europe.

"When I use this image, I get violently attacked on social media … when I remember the Christian heritage of that continent, that sounds so old-fashioned, so conservative, so backwards," he said.

"I tell you I do not care, I think it's important to describe the fundamental values ​​of this continent, we're proud of that, and we will protect those values."

On Wednesday, Weber tried as well as Stubb, to avoid confrontation in their only election campaign debate, and kept away from the most painful subject of all: the presence of the Hungarian Prime Minister Viktor Orban in the ranks of the EPP.

Orban and his Fidesz party have been accused of trampling on European values, notably through strict anti-migration policies and repeated human rights disputes with Brussels.

Weber, who heads the EPP Group in the European Parliament, had received the most important nods from Merkel and the head of the French center-right Republican party Laurent Wauquiez.

He also expects the right-wing Austrian Chancellor Sebastian Kurz and Orban to gather for his cause, and they duly presented in speeches to the 758 delegates.

But other leading EPP members warned of the danger of populism and nationalism Council President Donald Tusk went against Orban – without naming him.

"If you dislike the free press and NGOs, if you tolerate xenophobia, homophobia, nationalism and anti-Semitism, you are not a Christian Democrat," Tusk explained.

"If you want to replace the Western model of liberal democracy with an eastern model of" authoritarian democracy, "you are not a Christian Democrat.

The vice-president of the EPP and the EU leader Brexit negotiator Michel Barnier stood for the European federalist instincts of the party and against the lure of Euroscepticism.

"We must fight against those who want to demolish Europe with their populist deceptions with their attacks on the European project," said Barnier.

Manfred Weber (C) won the support of 79.2 percent of the delegates of the European People's Party y (EPP) meeting in Helsinki

Coronavirus curfew in Kenya: 13-year-old Yassin Hussein Moyo dies after being shot by the police