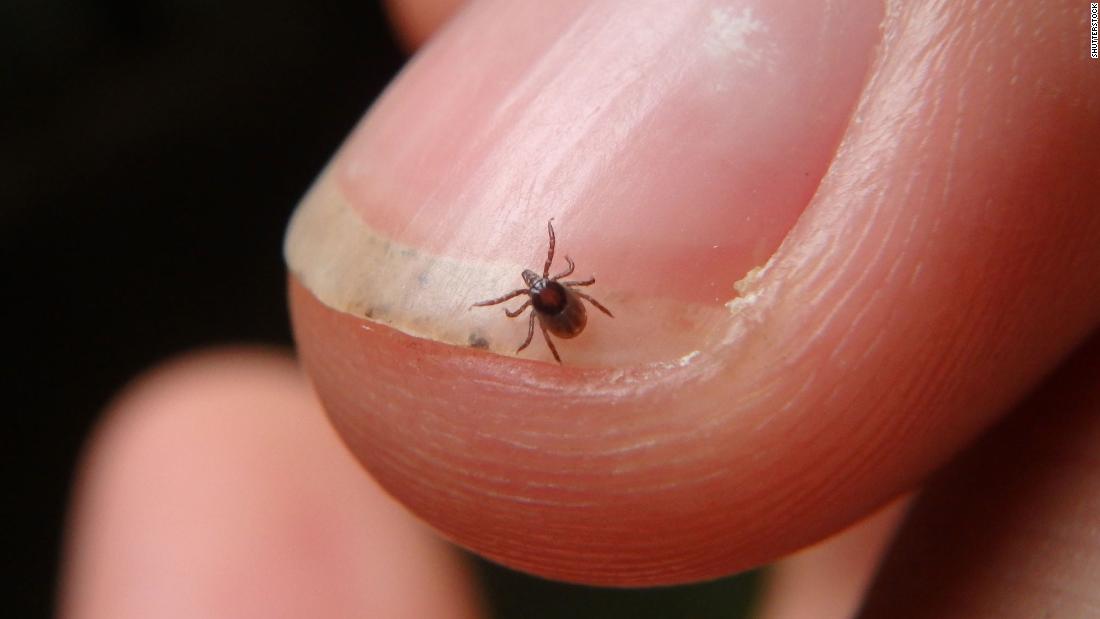 Forget about staying 6 feet apart: ticks search for blood in the hardest-to-reach areas of the human body.

And the area where Lyme disease occurs is growing.

According to the United States Centers for Disease Control and Prevention, exposure is now high in the states of the Midwest, Northeast and Mid-Atlantic.

And even though it’s too early to say how bad the ticks will be this year, some indicators point to a population increase at the beginning of the season in the US. Ticks reported sightings from TickSpotters’ crowdsourcing survey at the University of Rhode Island rose 80% in March compared to the previous year.
This does not necessarily mean that the tick population has increased so much. Program director, entomologist Thomas Mather – you can call him “The Tick Guy” – said the increase could reflect a higher number of ticks, people who spend more time outdoors, or a combination of the two.

The tick population is likely to fluctuate during the season anyway, said Mather, a professor at the Institute of Plant Sciences and Entomology at the University of Rhode Island. “What we see in real time is not always a good prediction of what could happen in a month or two.”

In April and May, the reports were closer to what Mather saw in 2019. But even if the tick numbers remain constant for the rest of the months with warm weather, encounters with the tiny arachnids will remain a serious problem.

Ticks can not only transmit Lyme disease, but also other diseases. If left untreated, some of them can be fatal to both humans and pets.

And because sunny days send people outside to breathe fresh air amid the pandemic, the risk of contracting a tick-borne illness or infection increases wherever ticks can be found. Here’s what you need to know to stay tick-proof this year.

What are the most serious tick-borne diseases?

Concern about the coronavirus pandemic does not mean that other threats have disappeared.

“There are numerous tick-borne pathogens that are on the rise,” said Allison Gardner, medical entomologist and assistant professor of arthropod vector biology at the University of Maine.
Gardner noted that the United States is struggling with the parasitic infection babesiosis; it can also be found in Europe.
The bacterial disease anaplasmosis is also a major problem in the United States and has become a more serious threat in the past two decades. More than 6,000 cases were reported to the CDC in 2018, compared to 348 cases in 2000 when data for the disease were first collected.

As with Lyme disease, early symptoms of anaplasmosis include fever, chills, headache, and muscle pain. Antibiotics are effective against anaplasmosis, but if left untreated, the disease can be fatal. People with weakened immune systems are particularly at risk.

In Europe, encephalitis transmitted by viral ticks is a problem with 3,092 confirmed cases in countries of the European Union in 2018. There is an effective vaccine against the disease that can cause fever, headache, paralysis and cramps. (Other tick-borne diseases in Europe are tick-borne relapse fever, Crimean-Congo hemorrhagic fever and Mediterranean spot fever.)

However, the most common tick-borne risk in the US and Europe is Lyme disease. And the vast majority of cases can go undetected.

Around 30,000 Lyme disease diagnoses are reported to the CDC annually. However, the agency estimates that actual cases in the US can be ten times higher. A 2016 report in the Journal of Public Health estimated 85,000 cases of Lyme disease per year in Europe. It found that reporting is inconsistent and that many of these cases are unlikely to be diagnosed.

Early symptoms of Lyme disease include fever, chills, headache, muscle aches, and a pronounced porthole rash that expands from the bite itself. (Although a rash is a known sign of infection, it occurs in 70% to 80% of cases.)

If left untreated, symptoms of Lyme disease may worsen and include facial paralysis, palpitations, and severe joint pain.

Gardner, the medical entomologist at the University of Maine, spends her days in the field, pulling a bright cloth through tick habitats. The ticks reach for the fabric, where their dark bodies are clearly visible.

This is a research trick you can adjust to protect yourself. “Light-colored clothing can make it easier to recognize the ticks on you,” said Gardner, whose work puts them in frequent close contact with the tiny creatures.

Another way to protect against ticks is to put pants in socks. Because ticks crawl up off the floor, it’s easier to spot them before they slip under your clothes.

Treating clothes and shoes with the insecticide permethrin can also be effective, especially in combination with a DEET-containing insect repellent that is applied to the skin.
There are also ways to protect the area outside your home from ticks. The University of Rhode Island’s Online Tick Encounter Resource Center recommends a variety of home projects, starting with raking leaves, cutting low-hanging branches, and pruning shrubs.
The type of plants you have in the yard is also important. Studies in the United States have found particularly high numbers of ticks in the Japanese barberry and honeysuckle invasive plants, both of which were introduced as ornamental plants.

“Removing these invasive plants from the landscape has the added benefit of inhibiting exposure to tick-borne pathogens,” Gardner said.

Looking for ticks – and what to do if you find one?

Even if you practice conscientious tick safety outdoors, it is important to check yourself and your children for ticks when you return.

That means full body control: work with someone who can inspect every corner of your body, or use a hand mirror to look at hard-to-see places. Some places where ticks are easy to miss are your ears, navel, arms, and the back of your knees.

(A careful review should take a minute or two – long enough to hear a few verses from “Ticks,” a Brad Paisley song that is the unofficial hymn to the safety of vector-borne diseases.)

Rinsing can also help. Showering within two hours of entering can reduce the risk of Lyme disease, according to the CDC. If they are hit with water, ticks that are not attached can simply wash off the drain.
It is also a good idea to check your clothes. If you are concerned that your clothes still have ticks, you can dry them on a high heat for 10 minutes to hang them up, as washing alone is not enough.
If you find a tick on your skin, it is important to remove it as soon as possible.
Have a pair of tweezers with a fine tip ready to hold the tick close to the skin and pull it off with even pressure. (This CDC fact sheet shows the process in more detail.)

If you develop a rash or fever within a few weeks of finding a tick, contact your doctor.

In areas with a high incidence of Lyme disease, it is still a good idea to check in. Depending on how long the tick has been attached or embedded, the provider may recommend further treatment or monitoring.

What about your pets

There are two considerations when it comes to pet and tick safety: you need to be safe and ensure that you are not exposed to ticks that bring them into the house.

Some of these diseases can be fatal.

Fortunately, dogs can be vaccinated against the bacteria that cause Lyme disease. (Even during the pandemic, many veterinarians are open to treatment, including vaccinations.)

To protect against other threats, the University of Rhode Island’s Tick Encounter recommends combining vaccination with additional tick-preventive treatments.

Cats do not appear to be susceptible to Lyme disease. However, in the southern United States, they can catch tick-borne Cytauxzoon felis, a parasitic disease that is often fatal. To protect your cat and your household, it is important to use tick-preventive treatment when the animal is spending time outdoors.

As with humans, a thorough visual inspection is a good way to look for ticks in cats and dogs. (Read CDC’s tick removal tips for pets here.)

It is a habit that protects your pet while preventing the arachnids from attaching to an endangered human food source: you.