WM: Do politicians try too hard? 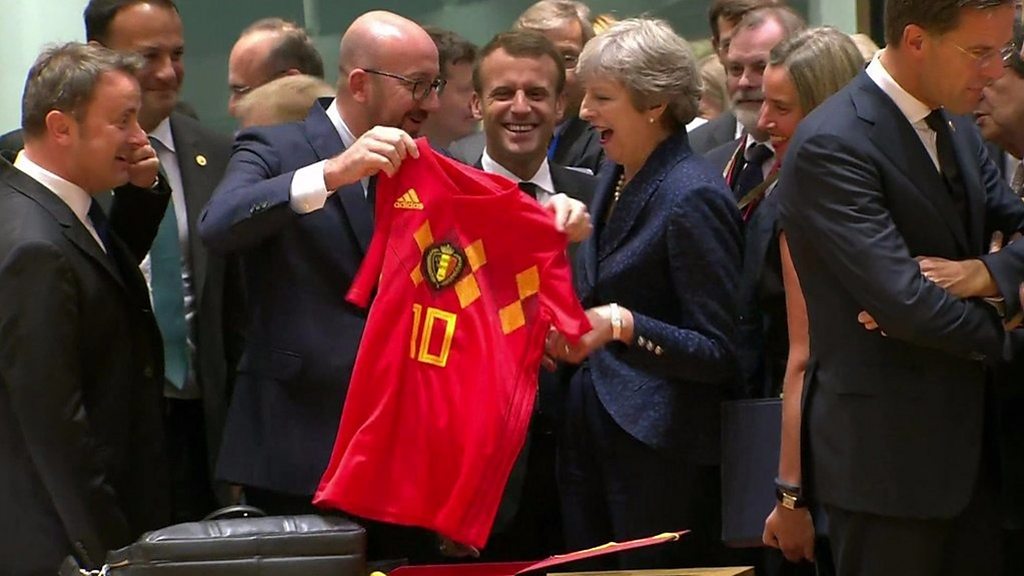 England has reached the knockout stage of the World Cup Despite the 0-1 defeat against Belgium, the politicians want to intervene with variable results in the action.

Prior to the collision between England and Belgium in Kaliningrad, Prime Minister Theresa May was assaulted by Belgian Prime Minister Charles Michel wearing a red Belgian football jersey that inevitably bore the word "Hazard".

Chelsea's Eden Hazard is one of twelve players in the Belgian squad that are active alongside Manchester City's Vincent Kompany and Manchester in the Premier League United's Romelu Lukaku.

Ms. May says she wants to build a positive trade relationship with the EU after Brexit and keep the door open for highly skilled EU migrants. Maybe that will be Belgian footballers as well.

A few hours later, just as the teams started, Theresa May gave England a jersey for the Belgian Prime Minister

May has never shown much interest in football, but she knows her cricket, as she showed last year in an interview with BBC Test Match

1; but Brexit may have given things an extra edge.

Irish Prime Minister Leo Varadkar, whose country could not qualify for Russia after losing to a play-off against Denmark, told the BBC he wanted to win the Red Devils on Thursday, not the Three Lions.

Nigel Farage never misses an opportunity to fly the flag or visit the pub, so it was no surprise to see pictures of him playing the England game in a Brussels bar.

Then there is the generic "Come on England" -Tweet seems simple enough, unless individual players are co-opted into the message ,

Jesse Lingard's political views are unknown. Three years ago, Raheem Sterling aired a video in which he assured Labor's Dawn Butler his support.

Butler, a close ally of Jeremy Corbyn, was a member of parliament in the part of northwest London where Sterling had grown up.

But he was accused of making his own World Cup gaffe, a quote from ex Liverpool manager Bill Shankly ahead of England's game against Tunisia

As many Twitter employees have noted, Shankly may not be the ideal person to give the English national football team inspiration from the game.

The Scottish legend once said about playing for his country: "It's awesome, you look down at your dark blue shirt, and the little lion looks up at you and says," Come out to the English …! "

Some political slip-ups in the World Cup are a bit more subtle, and while the basic rules of football are well known, the use of the wrong football formula may banish the game.

Conservative MP Nick Boles has his backing behind a campaign by the Sun newspaper thrown to fly the flag of St. George over government departments during the Games of England

But as every football fan knows, the "play-offs" of the World Cup are a series of games to determine which teams are ever for the game World Cup qualifying – not part of the actual tournament 19659004] The knockout stage in Russia – a series of matches between teams in their first or second place went to their groups and culminated in the World Cup final in Moscow on 15 July – is never referred to as "play-offs".

To do justice to Boles, he said that his campaign was about regaining the flag and building a modern English identity, rather than what's happening in the square.

Football is not his specialty, as he freely admitted in 2014 in a tweet:

I do not know anything about football now, but is it asking too much that we are now from Germany learn and invest in structures that bring future success?

The Sun's campaign was successful and the divisions agreed to fly the flag during games of St. George.

The Labor Party also made a subtle linguistic aberration in the run-up to the Belgian game.

When Labor participated in the World Cup demonstration to criticize Theresa May and her ministers, Labor tweeted that May's "Squad" should be "benched".

That might be something the people in the American Sport Commentary would say, but in the discussions about English football that's not a word.

But even if the 2018 World Cup tweets of politicians are sometimes a bit clunky, they do not quite reach the heights of David Cameron's 2015 faux pas.

In a speech during the election campaign, the former prime minister falsely said he was a West Ham fan rather than an Aston Villa fan.

He said he was "off the script" and had it blamed on a "brain fade" and insisted "that I have been an Aston Villa fan all my life".