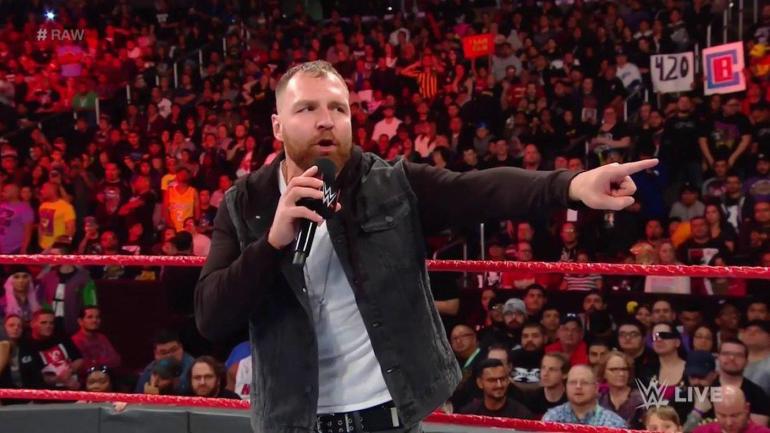 WWE, highlighted by Sunday's fantastic Survivor Series card, the momentum was all but lost one night later. Seth Rollins and Dean Ambrose and overexposed it in an almost unforgivable mail-in job on Raw, Monday's episode failed to capitalize on any one of the 24 hours earlier and, if anything, took an already red-hot angle.

WWE creative team content to press break and live off the after-buzz of such a successful weekend. Considering how inconsistent has been WrestleMania, it's a development that's incredibly disappointing.

Raw opened with Corbin and commissioner Stephanie McMahon gloating about her victory at Survivor Series. But Corbin's plea for a full-time general manager was interrupted by Strowman's arrival. McKahon granted Starbman his match against Corbin at TLC in December with the stipulation that Corbin becomes permanent GM with a win and loses complete authority with a loss. So you have granted Strowman his universal title rematch against Brock Lesnar at the Royal Rumble – but only if he beats Corbin. McMahon then overruled Corbin's attempt at giving Strowman a handicap match tonight to weaken him by announcing an immediate six-man tag elimination match.

Brown Strowman, Elias & Finn Balor Vs. Barney Corbin, Bobby Lashley & Drew McIntyre ends up in a no contest: McGee's is a 3-to-1 demolition starter McIntyre finished with a Claymore kick and Lashley Spears Elias to count him out. That's when the calculated attack started. McIntyre disqualified himself by Hitting Strowman with a chair before Corbin and Lashley continued to help him. Strowman, who was bleeding from his elbow and nose, thrown into the ring steps before absorbing a claymore. Corbin then used his belt to strowman's arm down so he could crush it with the top-half of the steps. Michael Cole went on to report he was a crushed elbow.

Raw what to get to astonishing 54 minutes of this segment and match, which was an early signal that this post-Survivor Series show would be a mail-in job. Yet despite the gratuitous nature of the book, the Stormman is almost made up for it. From Becky Lynch's Attack on Ronda's Rousey to Charlotte Flair's Turn on Rousey on Sunday, WWE has amped the intensity over the past seven days when it comes to physicality and stupefaction, in this case, sold it well. Still, Strowman is too good (and too over) to stay in a bed-busy feud until Lesnar's part-time schedule affords his return. A pay-per-view match with Corbin simply does not whet the appetite. Grade: C +

Rollins cut in in-ring promo how-to Sunday How the six-year anniversary of The Shield's WWE debut and how Ambrose does not have the guts to face him man-to-man before their Intercontinental title match at TLC. An angry Rollins then insisted Ambrose come out and fight. Ambrose appeared on the video screen inside the arena from backstage, where he was called Rollins desperate. "You have not got it, you have changed things," Ambrose said. "The Shield did more than good for over six years."

Ambrose went on to cryptically suggest that the Shield would be different than fans would expect behind the scenes. "Ambrose said." We were rotten at the core from the very beginning, and now we are going to pay for it. " "We want to get what we deserve." I mean, look at Roman … he has to answer to the man upstairs. " The crass remark in light of Reigns' battle with leukemia was met with boos from the crowd. Rollins then ran backstage to try to find him and assaulted security guards who were unwilling to help.

A cat-and-mouse game proceeded backstage with Ambrose escaping each time Rollins got close (including a boiler room that Ambrose wrote "burn it down" on Rollin). Ambrose then began cutting odd promos about a smell inside the arena that turned into heels insults about Los Angeles. Hey Rollins' anger with his comments by saying, "This is not about Roman – broken, crushed, shattered." After a frustrated Rollins left early to catch a red-eye plane, Ambrose closed the show with an in-ring promo that further insulted the "dirty little children" in the crowd. Rollins gave chase. Rollins gave chase. Dirty Deeds to stand tall, Rollins missed a stomp and Ambrose hit him with a low blow. "I was trying to talk to your people," Ambrose told him. "Do not ever interrupt me again."

What an incredible waste of time considering the storyline served as the backbone of the final two hours of the show. For as good as Ambrose's initial heel turn was received because of how it's been released after Reigns' reveal, it's hard to shake the feeling that his momentum has been completely lost since he broke his silence. Ambrose as a heel just is not working on the microphone with more cringeworthy moments – including his lengthy bit on the smell in the air – that's I'd like to count. The idea that Rollins was sogrily unable to find Ambrose backstage and would settle with leaving altogether was equally as comical. Even though it's been blown off, Ambrose's crass comment about Reigns turned out to be the best moment of the night for his character because at least that's real, and that's not a good thing on this night. Ambrose needs to find a way to become intimidating and angry without being in the process. Grade: C-

What else happened on Raw?

Nia Jax & Tamina Snuka def. Bayley & Sasha Banks via pinfall: Alexa Bliss sat in on a commentary as Bayley traded stiffly with Snuka in what turned out to be a fun little brawl. But with the crowd showering Jax continued to be injured Becky Lynch last week, WWE continued to smartly play it as part of the story. Jax used a referee distraction from Snuka to lay Samoan drop for the pin.

Lucha House Party def. The Revival via pinfall: The Match was competed under "Lucha House Rules," which did nothing but give the trio of masked cruiserweights an unnecessary 3-to-2 advantage. Kalisto, Gran Metalik and Lince Dorado, the execution was all over the place. The Luchas even made keep away from The Revival with a pinata at one point in a development which made even less sense. At least the finish was beautiful, as Dorado hit a shooting star on Wilder off the top rope for the pin.

Ronda Rousey def. Mickie James via submission: Rousey was all smiles as she fought off "We want Becky" chants from the crowd to deliver a speech about her toughness following a brutal attack from Charlotte Flair on Sunday . Rousey revealed she would defend her title at TLC against Nia Jax and vowed to get revenge on Flair afterwards. Rousey, who improved her delivery from a dreadful showing last week, so cut a promo about being a fighting champion. "This is me on my worst day," Rousey said. "If I can not defend this tonight, I do not deserve to be champion." Could it be destroyed? (Corbin the opponent would be him if he refused). Out came James, and after a slow start, Rousey made quick work on forcing a tap via armbar. Jax and Snuka to stare down, with jax rubbing her right fist before laughing and walking away.

Bobby Roode & Chad Gable def. AOP via pinfall: AOP manager Drake Maverick was heckled earlier in the night by his fellow WWE employees. To gain revenge, Maverick got a match against Roode & Gable. After a premonition of AOP, the baby faces earned a non-title win against the Raw champions when Roode hit a blockbuster on Akam and Gable followed by a flip over the top rope for the 1-2-3.

Natalya def. Ruby Riott via pinfall: One night after their pre-match shoving led to their respective dismissals from the Raw Women's Survivor Series team, Natalya finally earned revenge for Riott breaking her late father's sunglasses. Liv Morgan outside lets go to Riott Rolling up Natalya only for Natalya to make her own pin for the victory.

Prince Philip is “very disappointed” with Meghan Markle’s failure to “support the monarchy”.