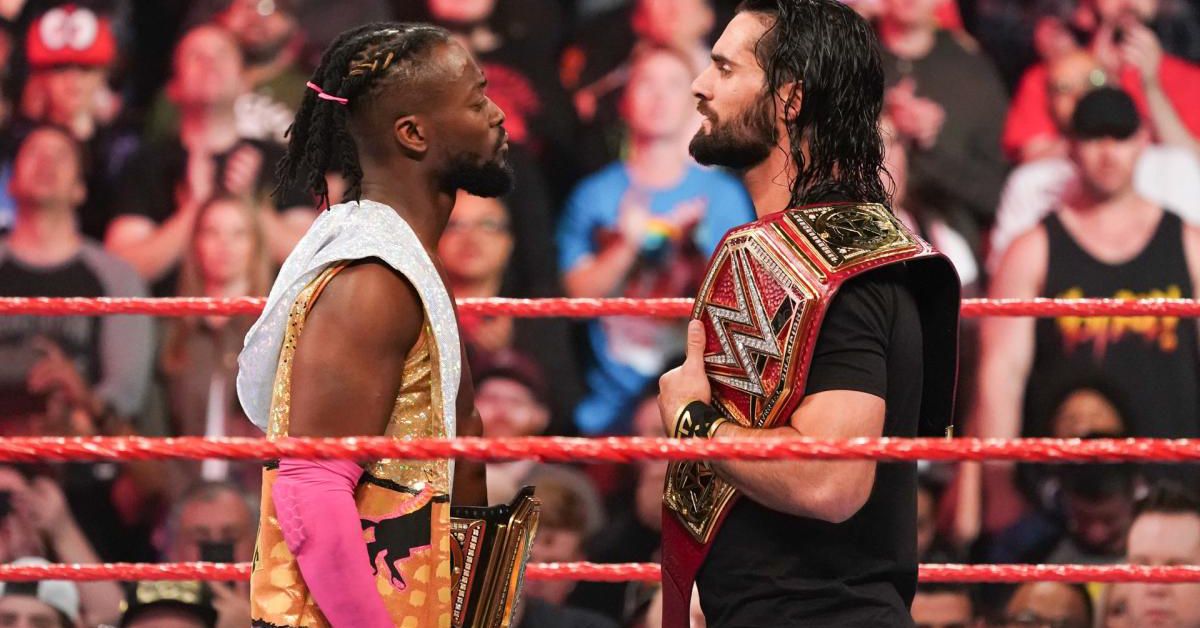 WrestleMania was so cool because all the biggest fan favorites were one. It made me feel that maybe WWE – just maybe – found out a few things.

24 hours later … Yes, you can throw this idea in the trash.

And I do not want to be too critical! Not really! God knows that Sami Zayn is already raving about my cynicism, but how on earth does WWE go through with an idea that makes OBVIOUSLY revolt fans?

We had a really cool moment to open the Raw to WrestleMania. Seth Rollins got his "You deserve it!" Chants from the crowd as WWE Champion Kofi Kingston and New Day crashed the party. Kofi wanted to do something special for the fans. Therefore, he challenged Rollins to a Winner Takes All Match to finish the show. Rollins accepted.

Well, logically … nobody expected a clean finish. Let's see that now. If you have seen wrestling for a long time, it would have been very surprising to see a clean end to this match. You would agree, Cageside? I want to make that clear.

So if we know that, we need to make sure that the one who interrupts does so in an exciting way. It raises questions that are moving forward with the program, and could be compounded by superstar shakeup's uncertainty next week. So who comes to mind? The undisputed era or another name of NXT. Maybe a babyface star in a heel. Damn, I'd say Lars Sullivan could have broken the game with great effect.

Nah. Let's The Bar interrupt the game earlier and turn it into a tag team match.

Stupid. So stupid. And if I give credit to WWE to purposely pursue that reaction … why ? Why would you do that?

Here we go again, people. Nothing has changed except a few belts. "We will finish this later!" Gimme a break.

Rap is the devil

Children, listen carefully: Do not rap unless you want to summon a deadman.

After being in the hands of Elijah, Doctor of Thuganomics at WrestleMania, was shown about halfway through Raw backstage and complained of his fortune. Rap is not that hard, he said! Damn, everyone could do it. And in the third hour Elias went to the ring to prove just that.

It went well to start. Elias had some excavations in John Cena that were comparable to those Cena had dealt with the previous night. But then? Well, Elias said the next person who interrupted him was a dead man.

He is a prophet! An all-seeing oracle! The third eyebrow of WWE! Elias was interrupted with a gong and everything … someone gives Elias reaction for me. Sorry?

The Undertaker was back and we got all the gongs and pipes. Smoke, lightning, thunder and everything. At first, it seemed Elias was taking the smart step; He got a foot out of the ring as he faded under the eyes of the Undertaker, but then he remembered all the talk of punishing people who had interrupted him. He slipped back into the ring and ate a boot, Chokeslam and Tombstone Piledriver of Taker for his troubles.

You see, I do not think this should be anything but a random fun on the Raw after WrestleMania – and that's perfectly fine with me. I just want to point out what a great spot Elijah has with WWE. It is a non-competitive musical act, regularly gets massive reactions from the fans and has segments with people like John Cena and Undertaker.

See you in hell

What a return for Sami Zayn.

WWE was hit blind in 2018 by some serious injuries, and I think we can probably put Zayn's twin rotor collar situation at the top of the list. I mean, yes, his feud with Bobby Lashley was not good – but who can say that she had a good Lashley feud to his point?

Oh, my bad one. Did not want to start criticizing or anything.

Zayn returned happily and asked for a match. He was at least nine months on the shelf, and he seemed a bit … strange when he made the request. Maybe conflict. And after a short delay, Intercontinental Champion Finn Balor answered the call from Zayn.

Could we please get a feud between these two? Like right now. Sorry?

The match was extremely funny because I was sure you could guess. It was just amazing to watch. This match was not meant to break the house, but it was so well fought and served the segment: to reestablish Zayn as a heel.

And boy, he sure sounded like a certain person SmackDown, right? The people are to blame. They are cynical and worthless – certainly not on Zayn's level of intelligence and happiness. Let's see what happens in Superstar Shakeup.

Beat Like a Lady – Becky Lynch came out and received the treatment she "deserved," but it did not get interesting until Lacey Evans made her nightly runway appearance. Only this time she hit Becky Two Belts in the face. I'm fine with it. I think Evans will lose everything that comes of it, but this brawl was fun. She should, however, bring her A-game better.

Ryder / Hawkins def. The Revival – I would really love to see one of the McMahons explain why these types of matches happen. How did they justify giving the revival a non-guaranteed rematch?

Anyway, somebody delivers Hawkins with Felix Felicis or something. Happiness will dry up, right?

Lars Sullivan debuts – He really liked Sullivan's debut, but he's a favorite of mine. I do not know why either. He simply clicks with me for some reason.

Corbin just wanted to get rid of Angle, so Angle came out to embarrass Corbin and fulfill his own terms. After running away from Corbin, Sullivan appeared and crushed Angle. He also got a good heat for it. I think Sullivan has potential when put in the right situation. So we'll see if that happens.

Ricochet and Aleister Black def. Chad Gable and Bobby Roode – The Glorious Guys had a new mindset for this game, but could not beat Black and Ricochet's NXT All-Star team. Black had a scary moment when his ankle was rolled under Roode, but he seemed fine.

Dean Ambrose's last night in WWE – That was really weird for me. Ambrose was to fight Bobby Lashley, but Lashley mocked him by saying he would absolutely take care of his [Ambrose’s] wife when he leaves. This resulted in a brawl and a non-match, in which Lashley finally brought Dean through a table. The crowd shouted "Thanks Ambrose" when we saw him up close. Renee Young looked at him before continuing with a little fanfare.

I'm questioning everything about Ambrose. The way WWE dealt with his supposed release from the company is so strange and that was no different.

Too much wrestling. Alex needs a break. Two claps and a Ric flair for me or something, please.