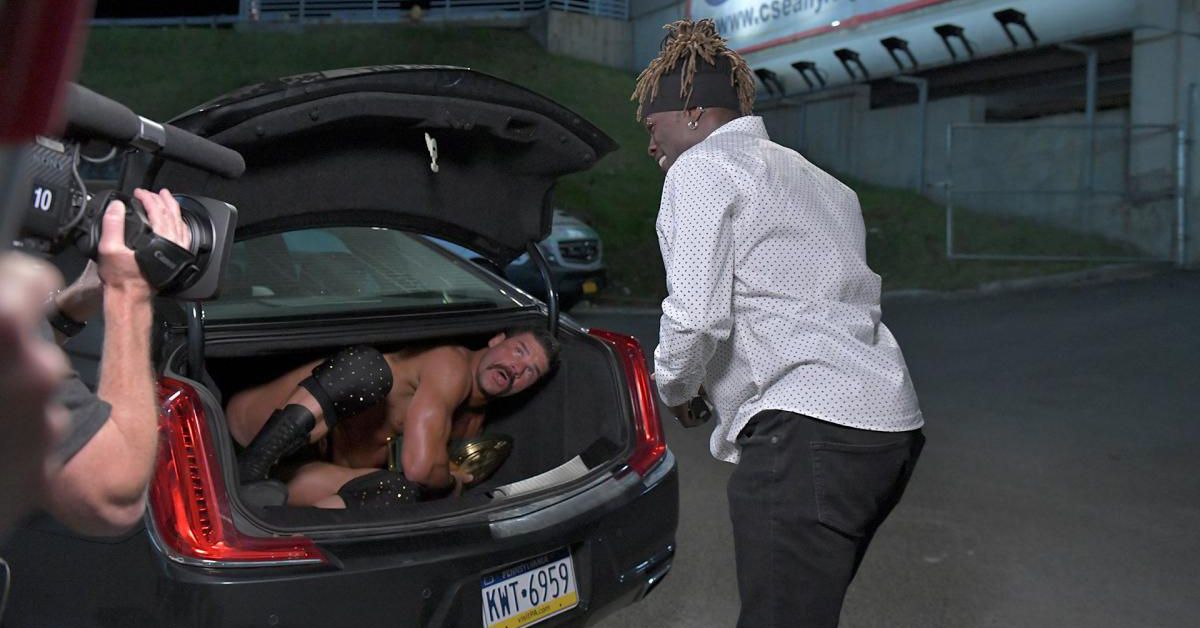 This 24/7 title has a chance to be really fun … but Cageside? At the first reaction of the crowd, I cackled like an idiot.

Mick Foley came out to start the third lesson and talked about how Raw had to become "raw" again. And then he pulled a narrow green-and-gold belt from his WWE felt bag and held it up.

The 24/7 Championship was to win … and the crowd made the sound together from the intro of Home Improvement . Man, I'm still checking it.

I hate the appearance of the belt at first glance, but I like it a lot better now, because we have an idea of ​​who will fight for it. Foley put this championship to the ground and all players with the lower card sprinted to the ring to fight for the prize. The club even toyed with tug-of-war until Titus O'Neil finally picked it up to become the champion.

… That is, the short-lived champion. Robert Roode raided him on stage with a roll-up, became our second champion, and spent the rest of the third hour running for his life when a low card mob pursued him.

Treachery was not over yet. Just before the main event, R-Truth helped Roode to hide in the trunk of a limousine. The truth has told the mob to take a different direction before he betrayed Roode and drove off as our third 24/7 champion.

I'm really excited about it. People with lower cards did not really have much to do and that could be really fun. In fact it is fun; That is nothing new. WWE even has material to pull out.

I never cite these reviews with a low card feud or offense. It's nice to do that once – and with good reason.

The beast has a boombox.

God, Brock Lesnar is so good when he wants to be. That damn briefcase in your hand like a boombox and dance with it to his own music? Pure gold.

I was not a big fan of Lesnar who won the briefcase, but that does not mean that this can not be done well. And with the story they wrote together, it's … okay, I think? The essential was that Lesnar had not "sneaked in" or anything, but he undoubtedly seized the opportunity to win the briefcase. And now both world champions are essentially at the mercy of his mercy.

Well, both world champions in question challenged Lesnar for a match he declined. The duo then denied a tag team match against Baron Corbin and Bobby Lashley in the main event. It turned out that the match was also not a DQ match, suggesting that some sort of McMahon fool is going on.

It was good for what it was. I mean, nobody here behaves as if Lashley and Corbin are a legitimate threat to one of the two champions, right? That's basically been their job for a year now. The good ones won in the end, but argued with the two before Lesnar seemed to finish the show and put in a cash before he left.

I'm … pleased (?) That WWE is trying to write an underlying mystery stuff going on here. I'm not sure if they ever explicitly said who hung Zayn on Money in the Bank, and that's two nights in a row where the card apparently changed at the behest of a McMahon: Charlotte's match at Money in the Bank , and the main event on Raw becomes a No DQ.

I just do not want to see more power games under the McMahons. I really do not know it. Especially after all the Shane McMahon garbage that I'll talk about below.

Let's put it this way: More Lesnar does stupid shit with his briefcase and less McMahons, right?

Alexa Bliss is each one of us

This Weekly Moment of Bliss was perhaps my favorite part of the show, just for some excellent bliss moments.

Bliss attempted to interview Becky Lynch with Nikki Cross, who was hanging around in the background as the IIconics turned up to troll The Man about losing a title. They were joined by Lacey Evans, who deserved to have done something to Lynch.

In response, Lynch challenged them all to a fight. Cross quickly offered the champion a hand before Lynch told Bliss that she too was fighting. Bliss was utterly unhappy about what to do, and reluctantly trudged to the ring with her coffee cup in hand.

That's a mood. This is a mood I feel every morning when I go to work for the first time. I feel like we just connected on a spiritual level, Alexa.

Bliss was fantastic outside the ring as well. She politely tapped the apron to cheer her new friend in Cross, and did her best not to attend the match. And in the end, Lynch and Cross could take care of the business.

The friendship between Cross and Bliss is a bit intriguing, but we've seen this stuff with Bliss before. WWE has to deliver a different result to make this feud really fun, but in my opinion, it's a good start.

Brown Strowman defeated. Sami Zayn – It's this time of year, people. It's time to build Jeddah. Strowman and Lashley have to deal with each other, which means Brown wins.

I would not be so repelled if this was a glorified house show that WWE did not promote, but they make this garbage a part of their television programs. It is disgusting. And I really have no interest in letting it go.

Roman Reigns vs. Shane McMahon in Jeddah – Can we agree that Reigns is not currently a SmackDown superstar? The third week in a row on Raw, right?

More Jedda card making. This time with Reigns, who calls Shane a rich brat (true), and Shane, who recruits Drew McIntyre to pay attention to his back.

More Shane / Jeddah Crap – Drew McIntyre defeated The Miz in a match to help him strengthen his muscles. Since WrestleMania it's downhill with the Shane / Miz feud.

AJ Styles beat Baron Corbin – Corbin beat AJ for loss and AJ beat him. Honestly, if Raw were just people who beat Corbin … I'd be cool.

The Firefly Fun House is satisfyingly scary – We did not get a real fun house segment this week. Instead, a lengthy fun house intro song was released featuring children with distorted features, blank faces, and the words "Let Him In." Inject this nightmare fuel into my veins.

Cesaro def. Ricochet – I really enjoyed on this match, but they did a commercial break, came back and then went to another to see a stupid movie I will not see.

Cesaro won, Ricochet lost. Commentary has done his best to defeat Ricochet, but I'm not a fan of these recent ricochet losses.

The revival defeat. The Usos – A fun TV match, but the best part is that The Revival sneaks Alexa Bliss behind the scenes with her party.

Samoa Joe challenges his title for next week. Not everything has to be shown in every show. Joe called what he experienced at MITB a farce, and he knows that Rey Mysterio, an honorable man, would not stand for it. And that he does everything right by returning his title to Joe.

Lars Sullivan's interview is canceled. – He never said a word. The Lucha house party interrupted her and made a little effort before Lars could crush her. In the end, he almost made it, but they threw it backwards.

New Illumination for the Third Hour – Carry on, WWE! I see how you try to make this last hour more appealing. I appreciate it.

Strange show for me. I liked much of what WWE did, but I hated almost everything that had to do with the top cardmaking. I did not like the way Cesaro / Ricochet went down, the McMahon / Reigns / Miz stuff, or anything about that stupid show in Jeddah.

But that meant that many new faces really shone. That's cool.

Actually, I wanted to give this show a bad grade, until it turned out that the 24/7 stuff was so amusing. If WWE succeeds in maintaining the 24/7 title fun, delivering the Cross / Bliss story and the Joe / Mysterio / Dominick story next week, it will make the Jeddah crap a little easier to tolerate.

.. But will point out how much I hated it, though.

What did you think of the show, Cageside?