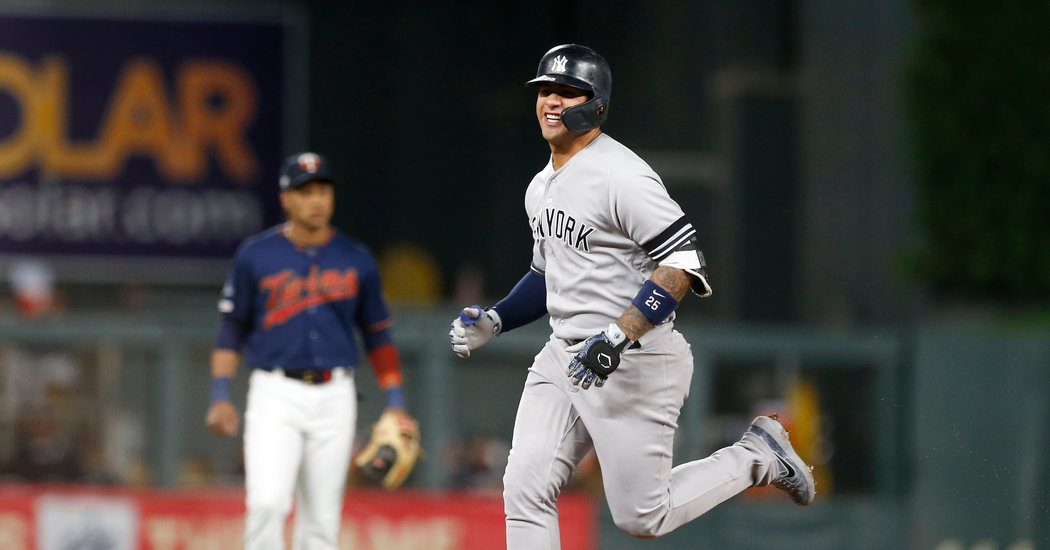 The Yankees have a 1-0 lead, and absolutely no one should be shocked that it came via home run. Luis Severino wriggling out of a self-induced jam in the bottom of the inning.

With one out in the top half of the inning, Gleyber Torres had the scoring started by lining a ball 376 feet to left center, just clearing the outstretched glove of Jake Cave. The Twins challenged Torres's first career postseason homer, but Gary Cederstrom, tonight's home plate umpire, confirmed the dinger.

The Yankees did not do anything else against Jake Odorizzi. Leading off, Giancarlo Stanton cuts meekly waving at strike three. After Torres's home run, Gary Sanchez got out of the inning when Didi Gregorius grounded out.

Severino left the right field by Eddie Rosario. Luis Arraez left the bench with no outs. That brought up the powerful Miguel Sano, who, on the eighth pitch of a tense at-bat, skied at infield fly that was reeled in by D.J. LeMahieu for the first out of the inning. Jake Cave on a slider.

The Houdini act was impressive, but the Yankees are likely concerned that their fragile ace is already up to 45 pitches. [19659007] 1st Inning: All Quiet in Minnesota

It was an uneventful first inning as each team had a batter reach base, but there was no real scoring threat.

Jake Odorizzi got off to a strong start in the top half by the inning by striking out DJ LeMahieu on four pitches, blowing three consecutive four-seamers past the all-star infielder. Aaron Judge appeared to be out of the box on catcher's interference. But Odorizzi recovered nicely, striking out Brett Gardner and getting Edwin Encarnacion to fly out to the threat of the threat.

Luis Severino was a bit shaky at first in the bottom, but still put up a zero. Jorge Polanco on a soft fly ball to leave. Max Kepler on five pitches and needed seven pitches to retire.

The Yankees wants to start trotting out the same starting lineup that generated 18 runs over the first two games of the series.

The Twins, going against a right-hander, wants go with the same lineup they used in Game 2 .