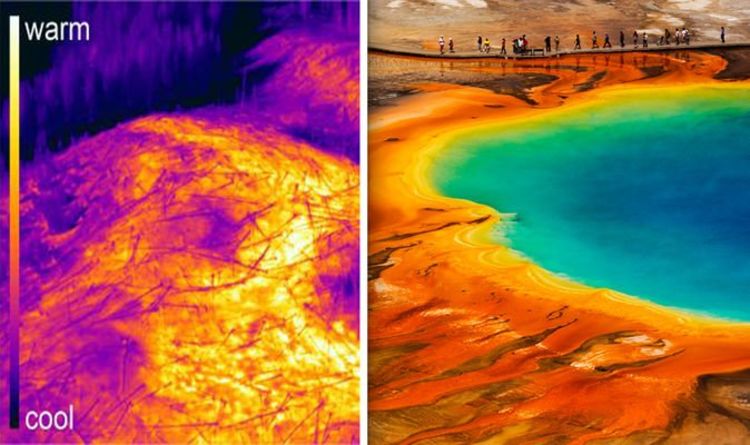 Yellowstone is a volcanically active region in the northwestern United States, as evidenced by its frequent geyser eruptions and earthquakes. In April of this year, geologists saw a new sign of activity when a so-called "thermal area" appeared on infrared scanners near West Tern Lake. The thermal area described a part of Yellowstone National Park where soil temperatures rose dramatically and burned grass and trees. Geologists at the Yellowstone Volcano Observatory (YVO) have now analyzed the thermal range to determine the extent of the damage caused.

A team of scientists visited the scorched area last week to conduct ground and aerial observations.

The geologists mapped the extent of the thermal range and measured ground-level temperatures.

The YVO is responsible for monitoring the Yellowstone volcano for signs of activity under the US Geological Survey (USGS).

The Yellowstone scientists wrote: "The soil was so warm that parts of the fallen trees actually turned into charcoal are." ,

"The sides of the fallen trees against the warm ground are burned and blackened, while the sides facing the sky are unburned.

"In the cooler zone, some parts of the soil had background temperatures. [1

However, temperatures would drop to a bearable 25 ° C within just a few meters.

Aerial views of Yellowstone from the 1990s show that this part of the park was a lush green landscape 30 years ago.

But in the summer of 2001 satellites picked up the first signs of trees withering.

Until 2006, a large area of ​​dead trees slowly expanded to the outside.

Three years later, the ground had assumed a chalk white color and mimicked the other thermal foci in Yellowstone.

YVO geologists said, "These observations raise many questions about the formation and evolution of the thermal domain.

"What killed the trees – the gases or the heat or both? And why is the vegetation already recovering in some areas? "

Fortunately, the emergence of a new thermal hotspot is not indicative of increased volcanic activity.

According to YVO, it is an integral part of the life cycle of Yellowstone's dynamic hydrothermal systems.

The new system appears to be merely an extension of the existing hydrothermal function of the West Tern Lake.

The Yellowstone Observatory said, "We were fortunate enough to witness the birth of a brand new thermal area and to visit it and collect data and observations at an early stage of its life."