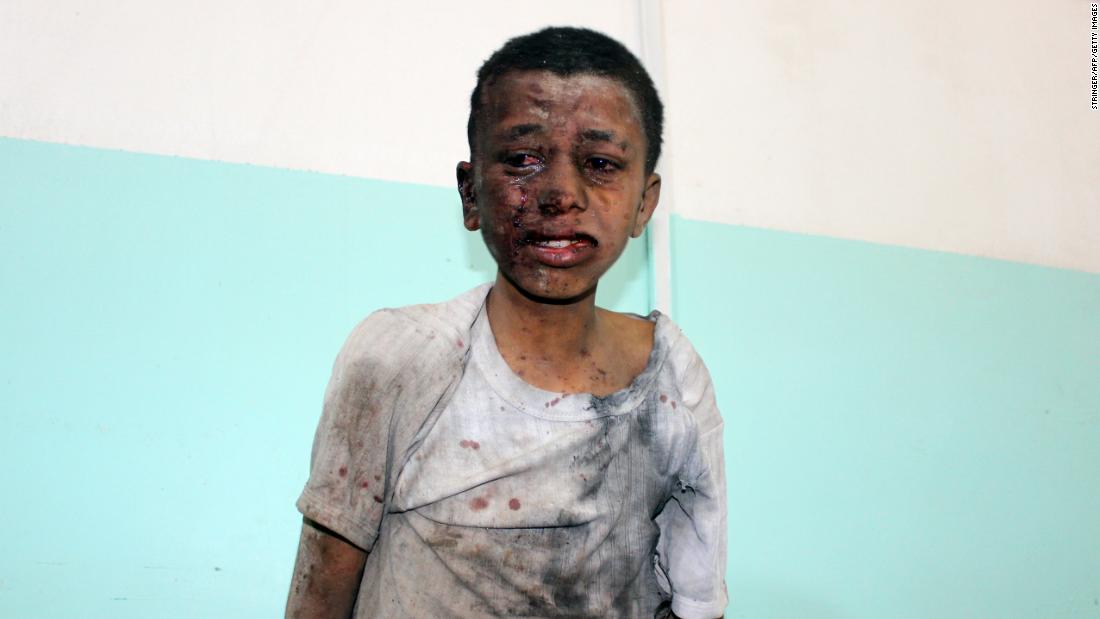 A video taken by one of the boys shows the classmates jostling and shouting in a crowded school bus, visibly upset for the upcoming day.

Your pleased chatter drowns the person who receives an appeal with a red pen in his hand.

A parent in front of the window says goodbye to her child.

Neighboring Saudi Arabia has led a Gulf coalition against Houthi rebels in northern Yemen since 2015, after Iran-backed rebels supported and displaced the US-backed pro-Saudi government

The children, reportedly aged from 6 to 11 years old, had been on an excursion to a rebel cemetery, one of the few green spaces remaining in the northern Saada regency.

"Because of the war Most parks and gardens are destroyed," said 40-year-old teacher Yahya Hussein. "The most beautiful areas are the martyr shrines and mosques," he told CNN.

"They were so excited about the excursion," Hussein said of the trip that took place End of the boys' two-month religious summer school should mark. "It was everything they had talked about in the last few days."

In the video, which was filmed by the student Osama Zeid Al Homran, the classmates Rezite are recited from the Koran. The moment the lesson is over, the children run to the cemetery for chase.

Later that day, after the boys returned to the school bus, a tragedy ensued.

Hussein had come too late for the excursion and parked his car shortly before the bus when the explosion came.

"I heard a loud explosion and there was dust and smoke everywhere," he said. "The scene can not be described – everywhere were body parts and blood."

"These were the kids who laughed, played, worked very excited a few days ago on their excursion and now they were just mutilated corpses," said he.

"I was frozen," said the father of three children. "I just started screaming," Oh people, oh world – these are just kids. "

Of the 51 people who died in the airstrike, 40 were children, Houthi Health Minister Taha al-Mutawakil said during a Friday press conference, adding that out of 79 injured, 56 were children

Medic finds son among the dead

Graphical footage of the immediate aftermath of the strike, broadcast by Houthi media, shows the charred bodies of the children under the inflated bus In a video, a Yemeni father sees the body of his son, partially covered by a blue tarp behind a pick-up truck.

Houthi TV network Al Masirah reported that one of the first medical professionals on the scene, Hussein Hussein Tayeb, found out that his son was one of the dead.

"As soon as I came with others who wanted to help, we thought we would have to care for the wounded quickly because of chaos – people were running over corpses and shouting"

"As I used to nurse a corpse and realized that it was Ahmed's face. I carried him and hugged him – he was my son. "

US General for Assistance in Investigations

"I sent a three-star general in Riyadh to see what happened here, and if there is anything, we can d "To rule that out in the future," said Mattis.

The Saudi state-run press agency reported on Friday that the coalition led by Saudi Arabia had launched an investigation into the attack.

Saudi Arabia denies civilians and continues to defend the incident Thursday as a "legitimate military operation" and a retaliatory reaction to a Houthi ballistic missile that attacked the Jizan province of the kingdom the day before.

The coalition's spokesman, Colonel Turki al-Malki, told CNN that the airstrike that hit the bus was "a legitimate target."

"No, these are not kids on the bus," he said. "We have high standard measures for targeting."

Thursday's strike was the worst attack on children since the brutal war escalated in 2015, UNICEF said Friday.

UN Secretary-General António Guterres condemns the attack and called for "an independent and immediate investigation" on strike.

Guterres said in a statement that all parties must "comply with their obligations under international humanitarian law, in particular the basic rules of discrimination, proportionality and precautionary measures in attack."

The Yemeni war today is the worst humanitarian crisis in the country World. More than 22 million people – three quarters of the population – urgently need help and protection from the United Nations.

More than 10,000 civilians have been killed and 40,000 wounded in the war, reportedly leaving 15 million Yemenis without access to clean water.